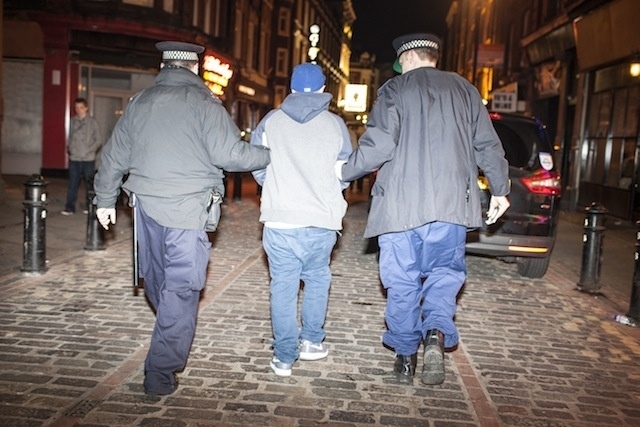 Police making an arrest after stop and searching someone, not drug testing him randomly in a club queue (Photo by Tom Johnson)

At first glance, Club Tropicana does not look like the epicentre of Aberdeen’s drug scene. The retro music venue attracts a mixed crowd every Friday and Saturday, which dances to Duran Duran and Spandau Ballet, overlooked by portraits of Del Boy and David Hasselhoff.

But on a Friday evening in late August this year, six police officers arrived at the club. They came with a sniffer dog, a CCTV van and an “itemiser”, which tests hand swabs for traces of illegal drugs. They also returned the following evening, testing around 100 people over the weekend. As it turns out, Club Tropicana is almost certainly not the epicentre of Aberdeen’s drugs scene. According to the venue, the police failed to record a single positive reading over the course of the two nights.

Police Scotland is now facing a major backlash over the incident. Everyone from the leader of the Scottish Lib Dems to the former head of Scotland’s drug enforcement agency have condemned the action. But what’s gone largely unnoticed is the extent to which clubbers across the UK have been facing drug tests for several years. What’s rightly now being flagged as a major infringement of civil liberties was quietly introduced without debate as early as 2002. It’s an increasingly common tactic – just one of a raft of draconian measures now routinely imposed on clubbers.

In Scotland, the incident at Club Tropicana is being seen as a nadir in relations between the nightlife industry and the police. Donald Macleod, the owner of several clubs in Glasgow, tells me: “Confidence among club owners and publicans is at its lowest level.” The situation has been worsening since police forces across the country were merged to create Police Scotland in 2013. Shortly afterwards, new chief constable Sir Stephen House said: “My view is policing doesn’t solve problems. We are not a solutions agency; we are a restraint agency.”

This view was at least partly responsible for the loss of legendary Glasgow venue the Arches in June last year – cited in an investigation into the closure by clubbing website Resident Advisor. Following a tragic drug death at the Arches, the venue became the focus of intensified police pressure and subsequently lost its late licence. A few weeks later, the club went into administration.

Scott Forrest was music programme manager at the Arches. “The police put the venue through the ringer,” he says. Forrest says the club was fastidious in reporting drug seizures to the police – reports which were then used to justify increasingly onerous demands on the venue. “We were following the law to the letter,” he says. “What are venues supposed to start doing – blood tests on the door?”

One Glasgow club operator tells me what happened at the Arches has led to distrust between the police and venues. “The concern for other operators is what happens if we continue to follow best practice guidelines and report instances of drug confiscations and other drug-related activities?” he says. “Effectively, the police are forcing what they perceive to be a problem underground.”

The incident at Club Tropicana has done nothing to help matters. “They are hailing the operation as a success,” says Macleod. “A waste of time and resources is closer to the truth.”

Police Scotland is far from the only police force to pursue such a strategy. In the last couple of years there have been reports of police in Yeovil, Swansea, Wokingham andBridgwater using itemisers. Club owners in Brighton and London also say they have been targeted. In case there was any doubt that police in Scotland and the rest of the UK share similar views on clubs, Metropolitan Police commissioner Sir Bernard Hogan-Howegave a speech earlier this year in which he asked: “Do we really need as many licensed premises?”

Police Scotland claims the itemiser is only used in partnership with venues. A statement said: “The use of the itemiser is done ethically, with respect to human rights and with the consent and support of licensees.”

Club Tropicana owner Tony Cochrane says this isn’t the case: “The club only heard 30 minutes beforehand. It wasn’t a choice,” he tells me. “They say they had permission in so much as the manager felt obliged to – what could he say? We objected the second night and they still did it.” Becky, a press officer at Police Scotland, called me to deny the club was given less than an hour’s notice, but was unable to say when the management was informed about the operation.

A London club owner tells me about two incidents of police drug tests at his venues in recent years when he was told he wouldn’t be allowed to open if he didn’t cooperate. Each time, one person out of 100 tested positive. Neither was found in possession of drugs. “There must have been about ten police officers in attendance on both occasions,” he says, describing the operations as “a complete waste of resources as well as an invasion of civil liberties”. But it’s not just club owners who have raised concerns. Civil rights group Liberty said back in 2002 it was “deeply worried” about the use of itemiser technology. Its worries obviously went unheeded.

People who visit nightclubs are now subject to stricter scrutiny than people boarding transatlantic flights. ID scanners, sniffer dogs, fingerprinting stations, breathalysers, body searches, CCTV and metal detectors are all in use across the UK. In other walks of life, this is only acceptable if you’re under arrest or, at the very least, suspected of a crime. Effectively, all clubbers are now classed as criminal suspects. While it would be naive to claim that people don’t take drugs at nightclubs, most don’t. And while plenty of other public places are also the home of occasional criminal activity, none face the same sanctions.

The Arches is not the only victim of oppressive licensing rules. Fabric escaped the threat of closure at the end of last year, but was slapped with a raft of conditions, including a requirement that it pay for sniffer dogs. The club is currently appealing. Alan Miller, chairman of the Night Time Industries Association, says clubs face both increased costs and a potential loss of custom as they become ever more inhospitable places to visit. “Cumulatively, these measures have an enormous impact,” he says. “It’s a major problem treating British citizens and tourists as if they are guilty of doing something wrong, indiscriminately.”

Even putting aside issues such as civil liberties and the importance of nightclubs to the UK’s cultural scene, there’s still a huge question mark over the approach being pursued by the police and licensing authorities: What exactly does it achieve?

Matthew Dimmack is director at The Haunt nightclub in Brighton. He recalls being visited by the police with drug testing technology at another club around eight years ago. If drug testing was supposed to tackle substance abuse, it doesn’t seem to have had much effect. Drug deaths in England and Wales are now at their highest levels since records began.

“If you come into my club and something happens, I’ve got a lot of trained people around. If you do drugs at home or in the park, there’s not anyone there to help you,” says Dimmack. “Stopping people taking drugs in nightclubs isn’t going to stop anyone taking drugs.”