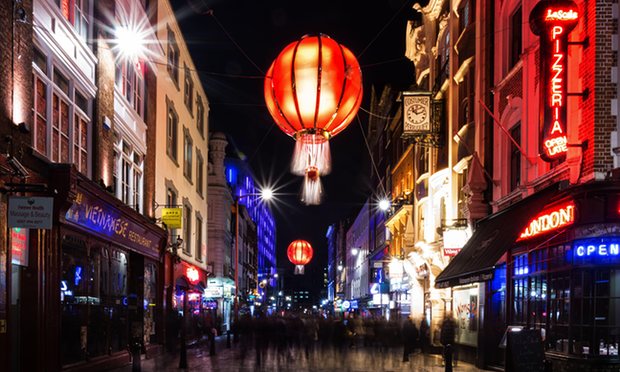 New York City no longer has the monopoly on nightlife – it is now just one of innumerable cities that don’t sleep, thanks to the global growth of businesses operating between the hours of 6pm and 6am. Welcome to the night-time economy.

In the UK, the night-time economy is worth £66bn, according to the Night Time Industries Association (NTIA), and employs 1.3 million people in hospitality and entertainment, including pubs, restaurants and music venues, and leisure and retail, including late-night shops, fast-food establishments, gyms and beauty salons.

But beyond obvious night-time hotspots such as Manchester, where 150,000 people visit (pdf) the city centre every weekend for its nightlife, the Association of Town and City Management has awarded Purple Flag status to 65 towns and cities in Britain including Aylesbury, Ipswich and Preston. The Purple Flag is an accreditation similar to the Blue Flag for beaches, but which acknowledges areas that meet or surpass standards of excellence for managing the night-time economy.

And in recognition of the significance of the capital’s night-time economy, next month sees the launch of the night tube, which will offer a 24-hour service on Fridays and Saturdays on some London Underground lines.

“Launching the night tube is one of those ‘Why haven’t we done this before?’ moments,” says Kevin Dunning, director of asset and operational support at London Underground. “It seems ridiculous to put the trains to bed given how busy London is after-hours.” Since 2000, night bus usage has increased by 170{123878aea732704bec6fd3a27db46f2e84ea6a6c9b762dd353db05b7a6b2f79b}(pdf).

Dunning says small businesses will undoubtedly benefit from the night tube. “We expect to create 500 jobs through direct operation of the service and a further 1,700 in the night-time economy.”

Steve Ball is the founder of The Columbo Group, which operates bars, restaurants and clubs in London including The Jazz Cafe, Xoyo and The Blues Kitchen. He hopes 24-hour transport in London will help reduce some of the tensions between residents and business owners in areas with a vibrant night life.

“It has always struck me as crazy that the tube closes at midnight in a city of global importance,” he says. “Providing the ability to disperse people safely and quickly when a licensed venue closes can be critical to its success.”

Of all the challenges associated with running a late-night business, countering the myth that they only attract antisocial behaviour, binge drinking and crime is the toughest, according to Alan Miller, chairman of the NTIA and co-founder of The Old Truman Brewery, which has helped to regenerate areas of London’s Brick Lane.

Miller believes night-time operators are badly affected by overzealous regulation of the night-time economy. “The 2003 Licensing Act that came into effect in 2005 allows for licensing [up to 24 hours] but councils have been wary about granting many [24-hour licences].”

Councillor Tony Page, spokesman for the Local Government Association (a cross-party organisation that works on behalf of, and represents, local councils), says: “Local authorities will consider various factors when determining an application for a late-night licence, which will be granted if the premises can demonstrate appropriate safety measures, including the ability of people to disperse quickly and quietly when the premises closes so as not to have an adverse impact on neighbouring businesses and residents.”

He adds: “In a few cases, where there has been a track record of problems at certain premises, such as serious violence or compelling evidence of ongoing drug use, councils will consider reviewing or revoking the licence.”

Food and drink entrepreneur Jonathan Downey is the co-founder (along with Henry Dimbleby) of London Union, which operates night-time licensed venues across London. He says it is a misconception that working in the night-time economy means dealing with drunk or abusive customers.

“We run the two largest private licensed venues in Hackney, and our venue on Great Eastern Street in Shoreditch is a few hundred yards [from one of the biggest crime hotspots] in London,” he says. “We occasionally turn people away if they’re drunk but we’ve never had any trouble in any of them.

“People don’t generally want aggravation on a night out. Hiring the right staff and setting out the right policies are key to eliminating trouble.”

Ball agrees that attracting the right night-time crowd starts with focusing on staffing. “We offer money bonuses to staff for developing their team rather than just hitting their sales targets, and that really affects the culture of a business, which in turn influences the atmosphere and appeal of a venue.”

Neil Cornelius’s eponymous hair salon on London’s Bond Street offers appointments 24 hours a day, but to combat people stumbling in from the pub demanding haircuts at 3am, bookings must be made between 9am and 6pm, and paid for upfront.

Cornelius loves working at night and says the salon takes on a different vibe after 10pm – think of the confessional element of the hairdresser-client relationship amplified by the intensity of nightfall. But he admits that running a 24-hour business has affected his personal life.

“When you’re in a relationship you can’t get away with getting up at 3am to go and blowdry someone’s hair,” he says. “Even dating can be difficult – you have to be really disciplined with the wine list if you’re heading to the salon a few hours later. My business basically comes before my love life.”

John Hannay, founder of Edinburgh’s Salt Cafe, which stays open until midnight, agrees that late nights and early starts can take their toll.

“There are two types of people working in late-night hospitality: those who love it and enjoy the challenges, and those who simply need it to cover the rent. We don’t employ the latter.”

What is it like to operate a night-time business in peak celebration times? Hannay says his staff look forward to the buzz that the Edinburgh festival – the largest arts festival in the world – brings to the city, but it’s business as usual. “We’re stricter with staff holidays during August, but the majority of our staff appreciate the chance to take on a few extra hours,” he says. “Plus, everyone is generally in good spirits during the festival because tips are always better.”

For many, running a night-time business is a labour of love. “My favourite thing is watching people come in after work to chill out over a bottle of wine and talk over the events of the day,” says Hannay. “It’s a bit of an honour that people spend their precious free time in our cafe; it’s like a nod of approval for what we’re doing.”