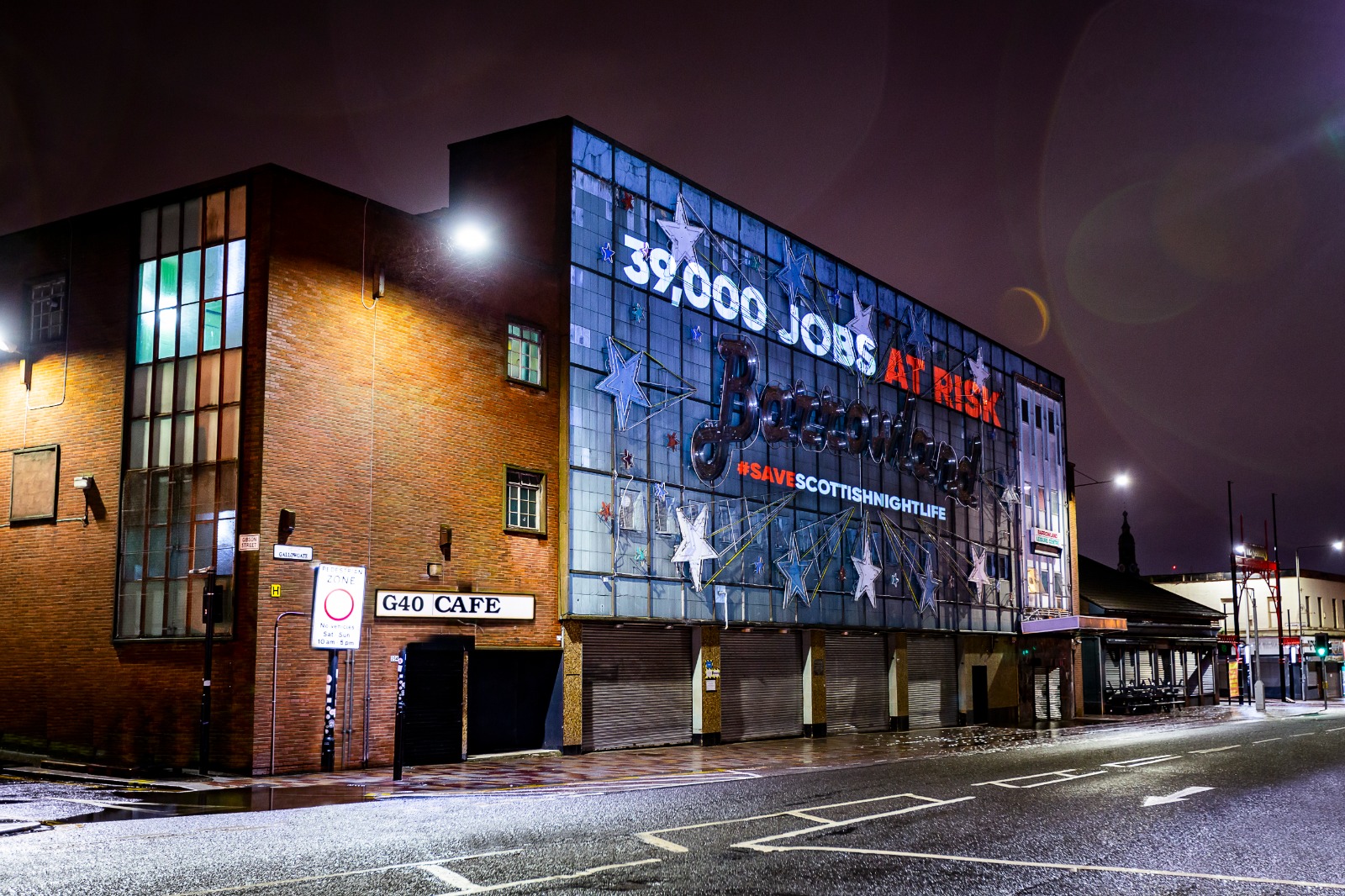 Night Time Economy Businesses light up Holyrood and the Glasgow Barrowlands as they call for the Scottish Government to prevent the catastrophic collapse of young people’s jobs in the night time economy and urgently provide a credible roadmap that safely and fully reopens Scotland’s music, nightlife, and culture sectors.  Only a clear commitment to a date for the complete end to all restrictions on capacity, activities, and opening hours can now ensure the survival of our culturally vital late-night economy and save the jobs of tens of thousands of young people over the coming weeks.

The NTIA fully supports the Scottish Government’s ‘Job Start Scheme’, and notes that according to Scottish Government up to 5000 young people a year will benefit.  However, the tragic reality is around 5000 young people per week will be losing jobs imminently without immediate action to restart this sector of our economy and end the restrictions such as social distancing that make the sector commercially unviable.  A vibrant and thriving nightlife, music, and culture sector is critical to the mental health and wellbeing of people of all ages, but young people in particular, and the ongoing restrictions now put at risk the entire future of Scotland’s cultural and hospitality sectors. Young people work where they socialise, and socialise where they work, so the impact of social distancing restrictions that make so many workplaces and social spaces unviable to open, is to tear apart the very fabric of society and the culture for the young and jeopardise the businesses and employment that form its foundations.

Young people’s jobs have been among the hardest hit by this pandemic. Up to 55 per cent of 16-24 year olds work in these sectors, compared with less than 20 per cent of the rest of the workforce.  Youth unemployment soared into double digits as a result, nearly doubling from pre-pandemic levels, as many employers have been subject to extensive periods of forced closure and unable to trade viably even for those allowed to partially open.

As a direct result of ending all financial support without ending the restrictions that make businesses in our sector unviable, the Scottish Government is in effect betraying Scotland’s young workers and Scotland’s cultural sector and condemning thousands of businesses to bankruptcy while risking 39,000 jobs within the next few weeks.

Thanks to the amazing success of the vaccination programme, a majority of Scottish adults have already been vaccinated, and the entirety of Scotland’s adult population will have been offered a vaccine by July.    Vaccination results are little short of miraculous, with hospitalisations from serious illness reduced by around 95%, and mortality virtually eliminated, just a few weeks after the first dose. It is now clear that the balance of harms is shifting rapidly, with harms from economic damage, unemployment, and mental health, now moving to the forefront.  That is why the NTIA has launched a legal action for Judicial Review in the Court of Session, challenging the continued application of measures such as social distancing and limits to capacity, operating hours, and activities, which make so many businesses in the cultural and hospitality sectors unviable and now have a disproportionate and discriminatory effect on young people.

“We urge the Scottish Government to open dialogue and enter into crisis talks with us immediately. As without a roadmap back to full reopening and commercial viability in the near term, or significant additional funding, a cascade of bankruptcy and job losses becomes the inevitable outcome. The future of our young depends on it.”