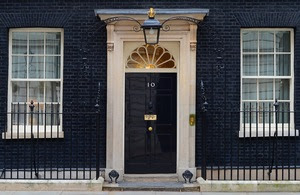 I’d like to update you on what we’re doing to fight this virus at home and abroad.

First, to what’s happening here in the UK.

I’ll ask Professor Van-Tam to set out the numbers and the details in a moment.

Overall hospitalisations and deaths remain very low, meaning we’ve been able carefully to take away more restrictions this week as we’ve taken step 3 of the roadmap.

But we must proceed with vigilance and everyone taking personal responsibility.

We’ve always known one of the things that has the potential to knock us off track would be a new variant.

That’s why we made the presence of a new variant that could do that one of our 4 tests when we set out the roadmap, which are the steps we must pass before going down each step of the roadmap.

But as the Prime Minister said at lunchtime, we have increasing confidence that the vaccines are effective against it.

That means our strategy is the right one: to carefully replace the restrictions on freedom with the protection from the vaccine.

What it means is that it is even more important that people get vaccinated.

As I’ve reported to the House of the Commons, there are now 2,967 cases known of this variant in the UK. We are determined to do all we can to ensure this new variant doesn’t put our recovery at risk.

So we’ve acted fast, to guard the gains that we’ve made together.

We now have an incredibly sensitive biosecurity surveillance system here in the UK, and I’m going to tell you some new details about that in a moment.

This surveillance system spotted the cases in Bolton and Blackburn early.

Through surge testing and increased vaccinations, we’re throwing everything at it there.

There are now 25 people in Bolton hospital with COVID. The majority are unvaccinated.

This shows the importance of getting vaccinated not once, but twice. So when you get the call, get the jab.

But these are not the only areas where we have cause for concern.

We’re seeing other areas where case rates are rising, and where we need to act fast as we have with Bolton and Blackburn.

We know that this playbook that we’re using in Bolton and Blackburn worked in South London against the South African (SA) variant where we had a series of cases of the SA variant and we brought that under control. And we’ve used our extensive surveillance system, and new techniques, to identify the areas we are most concerned about.

We of course look at the data on cases, number of identified variants and hospitalisations, and we publish all of this data.

But we are now able to use 2 further tools.

Mobility data shows travel patterns in different areas, and we look at this in deciding where the virus is at risk of spreading.

Next, we now analyse wastewater in 70% of the country, and we can spot the virus, and the variants in the water, and that can help us identify communities where there is spread.

As a result of all this analysis, we are now surge testing and increasing vaccinations in:

And we’re supporting the Scottish Government, who are taking similar action in Glasgow and Moray.

To everybody across the whole country, I’d urge vigilance as we open up and of course, as soon as you’re able to, to get the jab.

To everyone in these areas, please exercise caution. Get a test, and as soon as you’re eligible, get the jab.

I’m delighted to say that as of midnight last night, 7 out of 10 adults in the UK have now had their first dose.

That’s 7 in 10 people who have a big degree of protection against the virus.

I’m also delighted that almost 4 in 10 have had the extra protection that comes from having 2 doses.

I’d like to show you a chart which puts this into context, shows what this protection looks like across the country and also explain why we’ve taken the recent decision to change our dosing interval from 12 to 8 weeks for the most vulnerable.

This chart shows the proportion of people who’ve had a jab, according to age group.

As you can see, from the amount of green, uptake of the first dose has been phenomenally high. And we’ve followed the strategy of getting the first dose to as many people as possible, as quickly as possible. And for that read the over-50s in particular. You can see the very very high uptake rates and we are incredibly proud of how people have stepped forward.

But there’s still a little bit of a gap between the green bars and the 100%. What the experience of Bolton shows is that it’s incredibly important that we get vaccination even to the final few percent and encourage that take-up.

And as you go down the age range towards the left of the chart, fewer people have had 2 doses because it has been less time since they’ve had the first dose.

This is why getting the second dose into those who are most vulnerable to ending up in hospital and dying of the disease is so important.

Academic studies have shown that this decision to have 12 weeks between the 2 doses has saved around 12,000 lives.

But those figures are not yet 100% and we will not rest until we get them there.

And crucially, this acceleration now of second doses for the over-50s, for the most vulnerable, is all about getting the maximum possible protection to those at the greatest risk.

And while we deliver first and second doses, we are also working on our booster programme too.

And I just want to update you on that. This is all about making sure our vaccines stay ahead of the virus and this includes new vaccines specifically targeted at variants of concern.

I’m delighted to announce a new clinical trial backed by £19 million of taxpayers’ money to look at the use of current COVID vaccines as booster vaccines, and to see what combination and what part they can play in keeping us safe for the long term.

You can sign up to be a part of this trial at www.covboost.org.uk.

This will be the first clinical study in the world to look at the impact of a booster jab and I’m very pleased that we’re leading the way with this scientific endeavour, just as we’ve done so many times in this crisis.

Take, for example, the huge advances we’ve made in genomic sequencing.

Today we’ve published our Genome UK implementation plan for how we can build on this genomic science even further, including our commitment to sequence 1 million whole genomes. And I want to thank all the scientists and all those at Genomics England who have been involved in delivering this.

Which has also, through their genomic work, played such an important part in our tackling of the pandemic. Genomics saves lives, we’ve learned that in this pandemic so clearly and I’m determined the UK stays at the forefront of this scientific endeavour as well.

But we’re not just focused on the effort at home.

A few words on how we’re working to protect people all around the world.

We’ve donated over half a billion pounds to COVAX, which has now delivered life-saving COVID-19 vaccines to 120 countries and territories.

But over and above our cash commitment, the UK has probably done more than any other nation to help vaccinate the world’s poorest.

That’s thanks to the gift to the world of the Oxford/AstraZeneca vaccine, which is available at cost – no charge for the intellectual property. We invested: the British Government, Oxford University and AstraZeneca.

The 3 of us, we invested in the research and came together to develop and deliver a vaccine at cost for everyone.

And for context in terms of the scale of this decision, almost 1.5 billion vaccines have been delivered across the world.

Two thirds of this – 400 million does – has been injected into the arms of people in low and middle-income countries, including 170 million doses in India, which has been so badly affected by this virus.

And of the 67 million doses delivered through COVAX, over 65 million of them have been the Oxford/AstraZeneca vaccine.

Rather than changing the rules, as we got as many jabs in arms, right across the world, we just got on with delivering this at cost without any profit and I want to thank the team at Oxford and at AstraZeneca for the incredibly progressive and forward-looking approach that they took over a year ago now to set this up. And it is having an impact everywhere.

Just as we fight this virus at home, we’ll stand side by side with other nations all across the world.

I just want to add one more thing.

Because if this pandemic has taught us anything, it’s that our health is intertwined together.

Next month, I’ll be welcoming health ministers from G7 nations to Oxford – the birthplace of this vaccine that has saved so many lives

There we’ll hold the G7 Health Ministers Forum. It’s not just about how to fight this pandemic in the here and now, but how we’ll emerge, stronger, healthier and safer, with the great democracies of the world working together.

This is a virus that attacks all of humanity and it calls upon everyone to step up and think about what we can do, and you can play your part in that too in the same way that everyone has so far.

So, please remember the basics: hands, face, space and fresh air. And even as we take these steps together, get your rapid, regular tests and when you get the call, get the jab.

Now I’d like to hand over to Professor Van-Tam for the latest data.

Slides and datasets to accompany coronavirus press conference: 19 May 2021

Impact of Coronavirus on businesses and workers response published

Impact of Coronavirus on businesses and workers response published